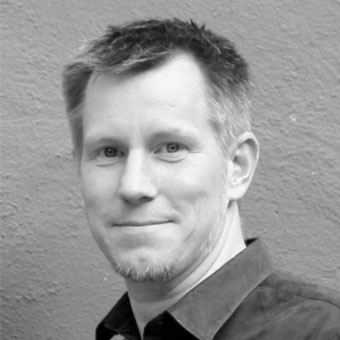 Chris Noessel is a Design Fellow at Cooper.

In his day job at Cooper, Christopher designs products and services for a variety of domains, including health, financial, and consumer; as well as teaching, speaking, and evangelising design internationally. Prior experience includes developing kiosks for museums, helping to visualise the future of counter-terrorism, building prototypes of coming technologies for Microsoft, and designing telehealth.

His spidey-sense goes off semi-randomly, leading him to speak about a range of things including interactive narrative, ethnographic user research, interaction design, sex-related technologies, free-range learning, generative randomness, and designing for the future.

He is co-author of Make It So: Interaction Design Lessons from Science Fiction (Rosenfeld Media 2012), and the force behind the blog scifiinterfaces.com.

As sci-fi geeks, we couldn’t help falling in love with Chris’s talk at SXSW 2008. Since then he’s published a book, deconstructed some of our favourite movie interfaces, and pushed the theme in a whole range of new areas. As for his workshop, we can’t wait!

Chris will ask the question, “How do you think new things?” Seemingly simple, the answer takes us through domains as disparate as divination and entertainment, but lands us squarely in the creative process. From techniques like poetics to force-fit grids to Oulipan writing to Design as Semiosis, all share a common deep structure that he’s named “Semantic Noodling” and the systems that use it “Meaning Machines”. Join him for this tour of his work in progress.

Star Wars was originally released in 1977, long before audiences had the daily deep engagement with computers that we have today, and long before interaction design was its own profession. What was mind-blowing technology back then can seem quaint today. How would you, as a professional designer, do it over again? (And let’s answer this question before Abrams’ reboot comes out.)

Come join him in this workshop where you’ll sharpen your design skills on reviewing and redesigning some of the interfaces found in this well-known and beloved film.